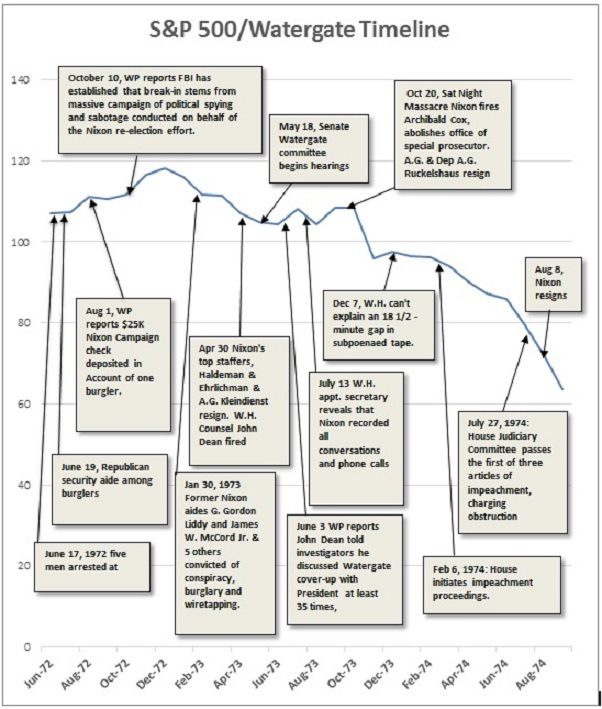 I don’t think that I am alone in wondering why equity markets have not only held their own but have actually added value despite signs of growing chaos in Washington. Do investors believe that the broader economy and corporate profits are largely insulated from such chaos? Or perhaps big money has access to information that is not shared with the rest of us. Are the investment community’s well-paid sources in Washington telling them that beneath the appearance of turbulence pouring from cable news channels, things in Washington are not as bad as they seem?

Perhaps there is another explanation. Despite the efficiency of markets in pricing equities based on company performance, consumer preference and technological change, perhaps markets aren’t particularly good at identifying and discounting political risk? There is at least one major historical example that might help shed some light on that question, Watergate.

Watergate was a long time ago and markets and the government itself have changed a lot in the interim. Further, while the current chaos appears serious, it may well never rise to the level or impeachment or resignation. On the other hand, it could result in a protracted stalemate even more problematic than an actual transition of power. So, the one event in modern American history that provides some semblance of the potential magnitude of the current problems in Washington is Watergate.

The events that lead to President Nixon’s resignation had an enormous impact on the political landscape. Three months after the resignation, Republicans lost 48 of the 192 seats they held in the House of Representatives, 25 percent of the total, the biggest percentage loss since 1932. Two years later, national outrage over Watergate catapulted a former Georgia governor Jimmy Carter into the White House and sparked a new era of harshly antiestablishment politics that persists to this day.

But Watergate also had an enormous impact on investors. Those unhappy people who may have decided to put their life savings into the market in the wake of President Nixon’s landslide victory in 1972 would have seen those savings ravaged over the following 21 months, falling 46 percent by October 1974. Those who held on in the face of that adversity would have eventually recovered their loses but they would have remained underwater for more than 6 years. Watergate was a grim period for those who ignored the old adage, “When the president sneezes, the market catches a cold.”

But the question this piece tries to examine is to paraphrase Senator Howard Baker, the Republican Floor leader at the time of Watergate, “What did the market know and when did it know it?” In other words, how well did the market assess the emerging risk of political crisis as events unfolded from the date that burglars were arrested in the Watergate complex to the date that the President boarded the helicopter on the south lawn of the White House to return to his home in San Clemente?

The answer is, not well—not well at all.

In June of 1972 when reports of the arrest of the Watergate surfaced, the S&P 500 Index was a little above 107. It remained there for most of the summer rising slightly in August despite a Washington Post report early that a $25,000 check connected to the Nixon Presidential campaign had been deposited into the account of one of the burglars.

A far more ominous report was published by the Post on October 10th. According to Woodward and Bernstein:

FBI agents have established that the Watergate bugging incident stemmed from a massive campaign of political spying and sabotage conducted on behalf of President Nixon’s re-election and directed by officials of the White House and the Committee for the Re-election of the President.

But investors shrugged that news off with share purchases that drove the S&P up another 6 percent by year’s end, leaving it 10 percent above the levels it had been when first reports of the burglary surfaced 6 months earlier.

The following year was filled with stunning revelations and some began to move the market toward greater caution. Most, however, did not.

In January, a federal jury found two former Nixon aides who had been charged in the burglary, G. Gordon Liddy and James McCord, guilty on all counts. In April, senior White House aides, H.R. Haldeman and John Ehrlichman resigned and White House Counsel John Dean was fired. In May, the Senate Watergate Committee convened its nationally televised deliberations and in June, former White House Council John Dean was reported to have told investigators that he discussed the Watergate coverup with the President on at least 35 occasions.

The S&P had moved from its December highs of 118 down to 104 by mid-summer but then rallied back in the fall to 108 in October when the President fired the Special Prosecutor and in the wake the firing, the Attorney General, Deputy Attorney General resigned. That got the market’s attention as the S&P gave up 12 points or about 11 percent of its value in the following month.

Still, the Index rallied back nearly 2 percent by the end of the year despite the disclosure by the White House in early December that 18 ½ minutes were mysteriously missing from subpoenaed tapes secretly recorded in the Oval Office.

The index moved only slightly in January and February apparently viewing the consideration by the House of a resolution to initiate impeachment proceedings as having minor impact on longer term market fundamentals. But as House Judiciary proceedings moved forward over the following 4 months the market gradually gave ground yielding more than 10 percent by June as the probability of impeachment became more certain.

It fell another 9 percent in July as the House Judiciary Committee voted out the first articles of impeachment, 9 percent more in August as the President resigned and 12 percent in September as the market digested the drama that had griped the Capital during the preceding 27 months.

The inability to inability of markets to grasp the implications the emerging crisis seems almost at certain points in this timeline but it was surely tragic for those who continued to put their savings at risk expecting that the market had already discounted the eventual fallout. Their pain may prove to be of value to today’s investors who have thus far been complacent based on the same expectation.

But it may also be of value to those who have concluded that the current President’s challenges are not as serious as they appear because of the lack of alarm being signaled by the markets. The Watergate example provides zero evidence of markets serving as a useful predictor of political tumult and dysfunction.

Stocks may rally in the coming months and the President may regain his footing and even become able to push major pieces of his agenda through Congress. While one or both may happen, investors and political prognosticators should look outside of equity markets for evidence upon which to build their expectations.

Scott Lilly - February 27, 2009
0
Since the Republican Conference of the U.S. House of Representatives is largely made up of individuals who believe their party lost the 2008 elections...