If you want to understand the extraordinary events taking place in the fight over health care reform, you should take Deep Throat’s advice to Bob Woodward many years ago during Woodward’s coverage of the Watergate story: follow the money. Massive amounts of cash are flowing into all types of activities aimed at influencing the final outcome. The stakes are high for doctors, hospitals, drug companies, nursing homes, and a host of other industries. But no industry has as much to gain or lose as private, for-profit health insurance companies.

On the other hand it is entirely possible that the United States could move to a system in which private health insurance companies could become even more profitable than they are today. If doctors and hospitals are forced to make concessions on the amounts they charge patients and the government succeeds in extending coverage to a substantial portion of the currently uninsured 47 million Americans, insurers could be in the cat bird seat. They could gain a huge new customer base and simultaneously cut their costs while maintaining high premiums.

It’s not clear which direction Congress will take. But it is clear that Wall Street is watching the legislative maneuvering with great interest. The equity analysts at Credit Suisse, an international financial services group, are very upbeat on the prospects for insurers and in particular the largest among them, Minnesota-based UnitedHealth Group:

Recent events in Washington reinforce our view that health care reform will include a substantial expansion of the Medicaid program and the creation of an insurance exchange with either no public plan option or a fallback public plan option. We believe UNH is best positioned to capitalize on the growth opportunities that will emerge through reform.

Specifically, we conservatively estimate that Medicaid expansion can add $0.05 to annualized earnings per share and that the creation of an exchange and/or increased employer-based coverage would add $0.25 in annualized EPS.

Moreover, we take a cautious stance on the managed care sector in general as we wait to see what form the final legislation on universal coverage will take. One proposal, a government-run public plan, would pose serious risk and competition to commercial plans currently offered by private insurers such as UnitedHealth.

…We think investors see health care reform, currently being addressed by President [Barack] Obama and Congress, as helping to reduce medical cost trends… But we suggest investors remain cautious, on our view that the idea of a public plan is still alive.

Shareholders have a lot at stake. If the cloud of health care reform is lifted and earnings rise even marginally the value of these stocks could soar. The 1.1 billion shares of UnitedHealth Group are divided amongst 14,000 institutional and individual shareholders. Credit Suisse projects the shares to rise from near $27 a share level where they have traded at for most of the summer to $33 in the reasonably near future. Analysts for Morningstar see potential appreciation in the shares of 66 percent, or to about $48. But even at $33 the total increase in the value of UnitedHealth Group shares will increase by nearly $7 billion.

But the personal financial implications for many insurance executives are much greater. Because of the widespread use of stock options in compensating executives in this industry, even slight changes in the stock’s value can have a massive impact on the executives’ personal net worth. If, for instance, an executive receives an option to buy 20,000 shares of his company at the current share price of say, $30, and he later exercises the option when the stock reaches $31 he will make $20,000. If, however, it reaches $32 his take will be $40,000 and if it rises by $10 to $40 the same options would yield $200,000.

In practice, the option packages awarded by the health insurance industry are far more generous. Stephen J. Hemsley joined UnitedHealth Group in 1997 and has been the company’s chief executive officer since 2006. As CEO of UnitedHealth he receives an annual salary of $1.3 million and “incentive pay” worth about another $2 million a year.

But his real compensation is in stock options, as evidenced by a report the company filed with the Securities and Exchange Commission this past February. Hemsley exercised options that were nearing their 10-year expiration date (options that he was awarded in 1999 when he was still chief financial officer and had been with the company only two years). The options allowed him to purchase 4.9 million shares of the company for $42 million or at an average share price of $8.72. He sold 2.9 million of those shares for $84 million or almost $29 a share and kept almost 2 million shares worth about $56 million. His net gain on the deal was in excess of $98 million.

Options are a sore subject at UNH. A shareholder suit brought against the company and Hemsley’s predecessor, William McGuire, for backdating option grants — granting a stock option dated prior to the date that the company actually granted the option — resulted not only in McGuire’s resignation but his repayment to shareholders of an estimated $468 million in ill gotten profits. Bloomberg News estimated that the profits McGuire retained from the option after the settlement exceeded $800 million.

How can insurance companies afford such lavish compensation packages? An analysis of their revenues and expenses provides a good deal of insight. A key measure used by investors to determine the worth of a health insurance company is known as the medical cost ratio or sometimes the medical loss ratio. This ratio is basically the portion of insurance premiums collected by the company that must be used to pay the medical bills of policy holders.

In the early 1990s insurance companies paid health care providers about 90 to 95 percent of the amount they collected in premiums. By the middle of this decade the average had dropped to a little above 80 percent. In 2007, for instance, UnitedHealth Group collected $69 billion in premiums and $6 billion for other fees and services but paid only $55 billion in medical bills. Of the nearly $14 billion in premium receipts that did not go to pay medical bills about 57 percent went for operating costs, which included among other things executive compensation, leaving around 43 percent for profits. Before-tax profits from premiums, services, and products totaled more than $7.8 billion and operating costs totaled $10.5 billion. 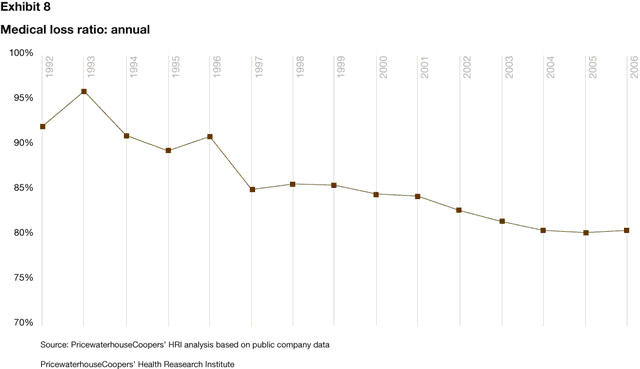 Assuming that UNH’s use of its revenue is fairly typical of the industry at large (UNH actually pays slightly a higher portion of its premiums back for the medical care of its customers than most other large health insurers) a family that paid insurance premiums of $8,000 to a private insurance company in 2007 could expect that about $6,400 would have gone to cover medical bills, $900 for insurance company operations and compensation, and $700 to profits.

Nationwide there are 4,400 government employees who work for CMS (including those who work to administer the federal share of the Medicaid program). Their annual salaries totaled $383 million in 2007. The profits that Stephen Hemsley reaped from the exercise of one year’s worth of stock options this past February would not only pay the salary of the administrator of CMS but of every employee in the agency for more than three months.

…Investors want that to keep shrinking. And if they see that an insurance company has not done what they think meets their expectations with the medical loss ratio, they’ll punish them… I’ve seen a company stock price fall 20 percent in a single day, when it did not meet Wall Street’s expectations with this medical loss ratio. They think that this company has not done a good job of managing medical expenses. It has not denied enough claims. It has not kicked enough people off the rolls.

The 10 largest private publically traded insurance companies had combined revenues last year of about $280 billion, of which more than $50 billion went to executive compensation, other operation expenses, and profits, leaving less than $230 billion for paying medical bills. That means that expenses other than paying medical bills equal about 23 percent of the amount that is paid in medical bills.

By comparison Medicare operational costs equal 0.5 percent of benefits paid. If only the 10 largest private insurers could cut their operational costs (administration and profits) to just 5.0 percent of the benefits they pay (the level that they were at in 1993 and 10 times the administrative overhead of Medicare) it would produce a 10-year savings of nearly half a trillion dollars or about half the amount needed to finance health care reform. If they were able to hold those expenses to 10 percent of the amount they pay in benefits the savings for just the top 10 for-profit insurers would total a quarter of a trillion over 10 years.

The allegations that have been launched against health care reform often border on the bizarre. Allies of the health insurance industry have charged that legislation now pending would establish “death panels” that would be empowered to terminate patients whose care had become too expensive. Others have said that individuals such as Senator Edward Kennedy (D-MA) would not receive appropriate care because of the terminal nature of his illness.

House Minority Leader John Boehner (R-OH) has asserted that 100 million Americans would be forced to give up their current insurance policies. Conservative economist and hedge fund consultant Arthur Laffer has argued that the legislation will create a huge bureaucracy making a visit to a doctor similar to visiting the DMV. And Senator Mitch McConnell (R-KY) has argued that the price of health reform will be paid by senior citizens as the result of cuts that will be made in Medicare benefits.

All of these allegations are patently false but they have had a remarkable shelf life because of the vast sums that have been pumped into free and paid media, mailings, online communications, and grassroots organizing. No one knows how much of this has been funded directly by the insurance industry and how much by other opponents of reform, but as the preceding discussion makes clear the insurance industry does not want this to become a debate about the facts.

It is impossible to justify a reform proposal that demands sacrifices from all components of the health care delivery system and simultaneously allows the kinds of excesses that have become commonplace in the insurance industry to continue. If the United States wishes to gain control over the rampant inflation in health care costs that is destroying businesses, bankrupting individuals, and wrecking havoc with state and federal budgets, it cannot leave an industry that has contributed so much to the escalation of health care costs in an even stronger position to expand margins at the expense of health care providers, employers, and individuals. That is currently the goal of the health insurance industry and they have made remarkable progress toward that goal given the quality of the case they have to argue.

If Congress cannot agree on a public option they must find some other method of protecting American consumers and employers from the costly and predatory practices of the health insurance industry. One would be a cap on the medical loss ratio.

Scott Lilly is a Senior Fellow at the Center for American Progress. He previously served as clerk and staff director of the House Appropriations Committee and executive director of the Joint Economic Committee.

This article first appeared at AmericanProgress.org.

Scott Lilly - February 9, 2009
0
As Senator Richard Durbin (D-IL) pointed out on the Senate floor yesterday, nearly all of the objections to the pending stimulus package are directed...