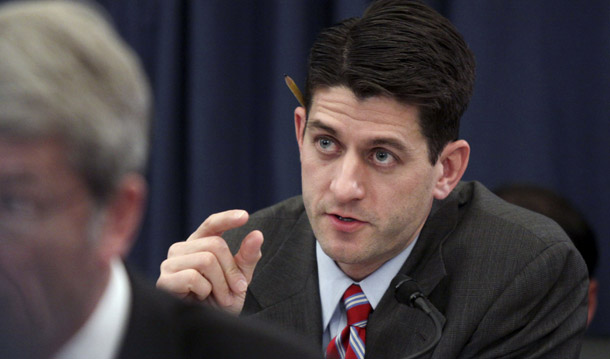 This article was originally posted at AmericanProgress.org.

Less than a week after the House Appropriations Committee sorted out its final staff assignments, their new chairman, Rep. Hal Rogers (R-KY), gave his subcommittees one week to find the $44 billion in cuts in current year spending from the newly concocted category of “nonsecurity discretionary spending.” That category contains 12 of the 15 departments of the federal government but only one-eighth of total federal spending. The cuts mandated by newly installed House Budget Committee Chairman Rep. Paul Ryan (R-WI) will lower the annual appropriations for programs in that category by 9.5 percent, but because the fiscal year is nearly half gone the reduction in operating levels will be closer to 19 percent for many programs. The subcommittees have been directed to complete this reshaping of the federal government by the end of this week, and the House is scheduled to vote on the proposal next week.

Is there something wrong with this picture?

With many of the 93 freshmen members of the House still asking rudimentary budget questions such as: “What is the difference between an authorization and an appropriation?” or “How do outlays differ from budget authority?” the time frame that Rep. Rogers and his leadership are committed to means that not only will those voting on the proposal have little opportunity to understand it but the authors themselves will not have fully vetted or completely understood what they are proposing. There have been no hearings, no requests for testimony, and no opportunity even for staff charged with proposing the cuts to do agency-by-agency analysis of the possible negative consequences. Members will vote next week on the package without fundamental knowledge of how major budget changes in literally thousands of federal programs will impact the country in general or their own constituents in particular.

In a previous column I offered an example of how such cuts might affect one particular federal agency, the Federal Bureau of Investigation. The FBI, like most of federal law enforcement, is curiously left out of the Republicans’ other new category of discretionary spending, “the security budget,” which includes only the Departments of Defense, Veterans Affairs, and Homeland Security. As a result most of federal law enforcement is subject to these cuts in the same manner as Head Start or foreign aid.

The FBI is currently operating under the continuing resolution at its fiscal year 2010 spending rate of $7.8 billion. When the legislation is signed into law it is reasonable to assume that $3.9 billion, or about half of the annual budget, will have been spent. If the 9.5 percent cut is applied equally to all “nonsecurity programs” it will mean that the FBI will have about $3.2 billion to operate in the second half of the year, or 81 percent of current levels.

But the problem gets even tougher. Many agencies in the federal government are like the FBI in that nearly their entire annual budget is made up of personnel costs. At the FBI 96 percent of the budget goes to salaries and benefits for the agency’s 33,000 employees. The only way spending cuts more than a few percent can be absorbed is through reductions in force — firing people.

The problem isn’t that we can’t fire FBI agents or other federal employees but that we save very little money in the short run by doing so. Over a six-month period, termination costs can easily be greater than payroll savings. This problem exists not only in federal law enforcement programs but also in regulatory bodies such as the Securities and Exchange Commission, revenue collecting agencies such as the Internal Revenue Service, benefit-monitoring organizations such as the Centers for Medicare and Medicaid Administration, and other relatively essential operations such as the Bureau of Prisons, the Federal Aviation Administration, the Food Safety Inspection Service, and so forth.

Many of these organizations might not be able to achieve a 19 percent cut in spending within a six-month period even if they shut themselves down entirely.

These may be extreme examples. And I am sure no one, including most House Republicans, wants to shut down the FBI or most of the other agencies I have mentioned. But exempting agencies makes the proposed cuts even more extreme for other programs. They include virtually all that we invest in education, health care, science, and infrastructure. Maybe a case can be made for cutting those investments, but this is not the way to do it. This is a process that is guaranteed to produce unintended consequences, and certainly more than a few will be highly unpleasant.

Former Sen. Alan Simpson (R-WY), the co-chair of President Barack Obama’s deficit commission, calls the proposal from Rep. Ryan “peanuts.” In an interview on CNN, Simpson argued that Congress’s failure to look at a broader portion of the budget would crush “all the discretionary spending. It just wipes it out.”

Simpson is right on both counts. The $44 billion that Rep. Ryan is insisting we take out of domestic spending is “peanuts.” With a $1.5 trillion deficit it could be lost as a rounding error. But applied to only a selected sliver of the entire budget it could do immense damage to critically needed government infrastructure and services.

Worst of all, House Republican are going down this dangerous road in the most haphazard manner imaginable. They are using none of the standard tools of the legislative process, such as extended staff investigations, publication of proposed legislative changes in advance of hearings, and request for public comment. The hearings that are scheduled on the budgetary needs of these agencies will take place after the House has voted.

This is a disgrace to the legislative process and a serious hazard to the American people. Speaker of the House John Boehner (R-OH) and his House colleagues need to reject this approach and put forward an alternative that insures we all understand what we are cutting and what benefits and costs of those cuts will be.

Looking for the Full Measure of Jack Murtha

Scott Lilly - April 11, 2010
0
This article was first posted at AmericanProgress.org. Twenty years ago I was the staff director of the Democratic Study Group, an organization that among other...