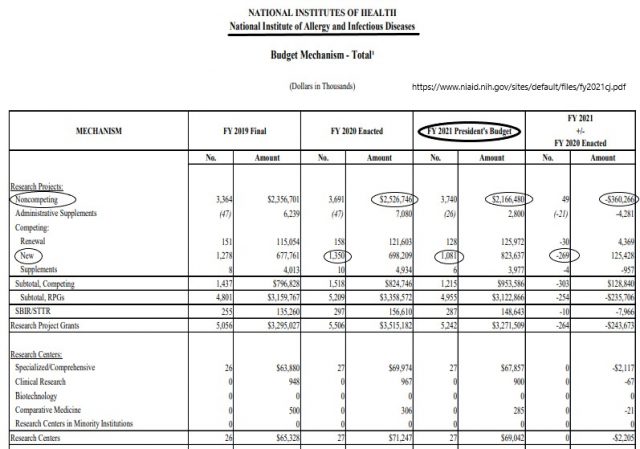 Nearly a month after the Corona virus was first identified and two weeks after the first case was discovered in the United States, President Trump asked Congress to cut the budget for the National Institute for Allergy and Infectious Disease by $430 million or by more than 9 percent in inflation adjusted dollars. Taking the full brunt of the cut was the Institute’s program for Biodefense and Emerging Infectious Diseases which was cut by $136 million—also a 9 percent reduction.

Most of the funding for NIAID goes to researchers in Universities and Hospitals across the country. Documents submitted to the Congress by the administration indicate that in order to meet the draconian cuts, the federal government would have to renege on commitments made to researchers who were awarded grants in previous years and reduce the level of funding promised to each grantee, thereby reducing the level of support originally deemed necessary to complete the research.

Despite the severity of renegotiation of existing grants, new grants would be hit the hardest. The number of new and competing grants would be cut from 1350 in the current year to 1081 in the coming year or by a total of 20 percent.

The National Institutes of Health account for a huge percentage of the total research conducted disease of virtually every variety. A 2016 survey found that NIH research accounted more than twice as much health research as the next 9 funders combined. Simply the cut he proposed to the Biodefense and Emerging Infectious Disease program at NIAID for this year is bigger than all of the research funded on all diseases by the World Health Organization. As a result, it is nearly impossible that any of these cuts could be made up from other sources.

Despite the size of the NIAID effort relative to other research programs around the world it is infinitesimal compared to the economic recovery program now being discussed to counter the effects of the Covid-19 virus on the U.S. economy. The entire proposed $430 million cut would fund the two $1000.00 check payments now being discussed at the White House for only about two thirds of the households in Lexington, Kentucky.

Scott Lilly - February 13, 2019
0
Those without Visas can take to the Friendly Skies Mexican citizens interested in entering the U.S. illegally should be cautious in the approach they use....