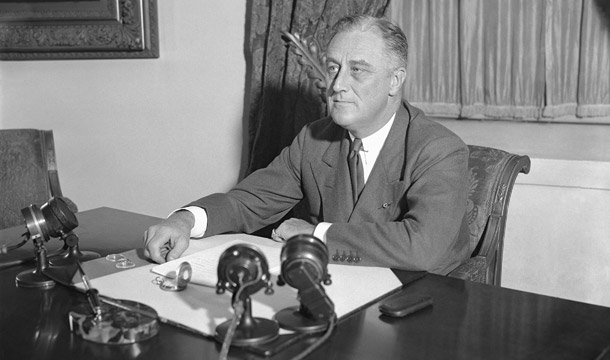 Amity Shale’s column “FDR Was a Great Leader, But…,” in Sunday’s Washington Post, is only the latest of many recent conservative pieces[1] arguing that the New Deal proves we should not use fiscal stimulus to curtail the current economic tailspin. But the lesson that should be learned from the New Deal is actually just the opposite.

The New Deal did many good things: it restored hope, resuscitated our banking system, and relieved much of the horrific human tragedy that struck the nation during the Great Depression. Survivors of that era overwhelming remember the New Deal as a positive force in their lives and communities. Yet the New Deal was seriously flawed as a macro economic policy—not because stimulus didn’t work, but because, as demonstrated by World War II, it would have worked, but was not tried.

The U.S. economy in the early 1930s was suffering from a huge gap between the nation’s capacity to produce and ordinary households’ ability and willingness to consume. It was caught in a vicious downward spiral in which consumer fear led to declining consumption, which in turn forced factory closings, adding to more consumer fear and more factory closings. The Hoover administration contributed significantly to that devastating tailspin by raising taxes and cutting spending in a failing effort to stem the growth of federal deficits.

The Revenue Act of 1932, which was signed into law less than six months before Franklin Roosevelt’s election, raised significant new revenues largely through a variety of regressive excise taxes. At the time of passage it was estimated that the legislation would generate $1.1 billion in new revenues, more than offsetting the projected deficit of slightly less than a billion. But the taxes were a crushing blow to a staggering economy in the world beyond the realm of budget theorists of that era.

The new tax measures increased revenue collections as a share of GDP by an astonishing 25 percent. But since GDP fell by 15 percent, the actual amount of money flowing into the Treasury remained constant. The deficit that resulted was $2.6 billion, or nearly triple the deficit that the tax increases were expected to eliminate.

Roosevelt was unwilling to substantially alter the tax policies established in the 1932 act despite the calamitous results of this legislation. Excise taxes drained consumer purchasing power about as quickly as the New Deal programs could create it. This is clearly demonstrated by the pattern of budget deficits during the 1930s.

Government outlays grew by about one third in fiscal year 1934 (the fiscal year that began three months after Roosevelt’s inauguration), but government receipts in that year grew at about the same pace and the deficit grew from about 4.5 percent to only about 5.9 percent of GDP. That would be equivalent in today’s economy to a stimulus package of slightly less than $200 billion or only a little larger than the package that President George W. Bush and Speaker Nancy Pelosi (D-CA) agreed to one year ago—extremely weak medicine for an economy with 25 percent unemployment.

The size of the deficit actually shrunk the following year, and fiscal policy served as a restraint to further growth. By 1937, politicians in both parties were clamoring for a return to a balanced budget despite continued high unemployment and the fragile state of the economy. The fiscal 1938 budget came close to balancing, but so did all of the dire consequences modern economists would have predicted. The recovery had been flattened by the later part of 1938, and unemployment was again pushing near 20 percent in what some economists labeled a second depression. [2]

The huge deficits of World War II quickly brought the Depression to an end. By 1942, unemployment had fallen below 5 percent, and by 1944, it was below 2 percent. And economic growth continued to be robust and unemployment was modest even after the war was over and the budget was returned to balance.

What is disturbing is that it seems unlikely, if not impossible, that the authors of all of these recent comparisons between the New Deal and the current stimulus proposals are unaware of this history. They not only understand Keynesian principles; they use them quite effectively when arguing for tax cuts for corporations and the upper class. When President Richard Nixon famously declared nearly 40 year ago, “We are all Keynesians now,” he was only half right. We are all Keynesians when it serves the interest of big business and high-income individuals, but only some of us are Keynesians when it comes to the public interest.

Failure to effectively address the dangerous downward spiral now taking place in the U.S. economy poses risks beyond our own job security, home equity, or the value of our retirement savings. Economic turmoil today, as in the 1930s, will inevitably lead to social chaos and political upheaval.

The Great Depression ended not when governments became willing to borrow in the name of economic recovery, but when they were forced to borrow in the name of war. The dangerous world we now live in will become increasingly dangerous as the privations created by this recession reach more and more areas of the globe. When conservatives scold about some aspect of the pending recovery package being wasteful, compare that waste to prospect of an unraveling world order.

2. There is considerable controversy over employment and unemployment levels during this era. The official Bureau of the Census, Historical Statistics of the United States lists unemployment in 1938 at 19 percent, but those statistics exclude jobs created under the Works Progress Administration and Civilian Conservation Corps. If they were included, unemployment might have been only 12.5 percent. Either of these measures, however, may understate the severity of the Depression in today’s context since non-farm workers had unemployment rates of 38 percent at the beginning of the New Deal. They declined to 21 percent by 1937, but rose back to 28 percent in 1938.

More from CAP on the stimulus:

Interactive Map: Beyond the Beltway: Helping Those Most in Need

Interactive: Build Your Own Stimulus Package

‘Non-security’ Spending Cuts Could Be Hazardous to Your Health

Scott Lilly - February 27, 2009
0
Since the Republican Conference of the U.S. House of Representatives is largely made up of individuals who believe their party lost the 2008 elections...