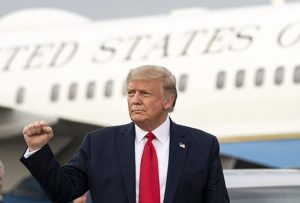 More than a hundred years ago, Sigmund Freud first described a personality trait he called narcissism. Freud said it was a dominant trait of a childhood personality but for most individuals it recedes as they mature to become adults.  Nearly all of us show some signs of narcissism from time to time and we probably have friends, colleagues or even family members whose inability to empathize and express concern for those around them make our lives at time awkward and even unpleasant.

Some argue that the current president of the United States is one such individual. They wish he would be less harsh and demonstrate greater empathy. Often they find his aggressive language and public rebuke of political opponents troubling and even shocking.

After four years of being shocked by the President’s behavior, I have come to the realization that it is not Trump who is to blame for my being surprised. I simply have not wanted to fully come to terms with the fact that the President of the United States has  seriously debilitating personality disorders.

While leaders in business, politics and other fields of endeavor often tend to be more narcissistic than the population in general, few are in Trump’s league. He is not your run of the mill narcissist. His grandiosity, failure to abide by long established norms and nearly total lack of empathy is without precedence among all previous American presidents and and national leaders in various fields.

Most disturbingly, the President’s behavior confirms for all who are willing to confront the facts that this disorder drives him to engage in behavior that is both self-destructive and beyond his control. And while some may take comfort in the fact that the time window for him inflict damaging is closing, a closer look at what health professionals know about people who suffer from the symptoms that this President exhibits, indicate that the final weeks may well be the most dangerous of all.

Trump is a nearly classic example of what clinicians refer to as “narcissistic personality disorder” (NPD). That disease is defined by The Diagnostic and Statistical Manual of Mental Disorders published by American Psychiatric Association as someone having at least five of the following nine characteristics:

The Mayo Clinic has published a discussion of the issues facing those with NPD. According to Mayo, people with the disorder have trouble handling anything they perceive as criticism and can:

Mayo says such people are likely to face:

Increasingly, observers of the President have speculated that his psychological difficulties may to extend well beyond standard NPD issues. John Gartner, a psychotherapist at Johns Hopkins Hospital in Baltimore argues that Donald Trump presents the behavior of a far more troubling disease known as “malignant narcissism”. Psychology Today, a publication of the American Psychological Association, has published several articles in recent years on this topic. One this past May was entitled, “Malignant Narcissism, Does the President Have It? An Update”.

The term “malignant narcissist” was coined by noted Psychologist Eric Fromm in his 1964 book, The Heart of Man: Its Genius for Good and Evil. Malignant narcissism is a combination of NPD and what clinicians refer to as “Antisocial Personality Disorder”(ASPD). A study published in The Journal of Clinical Psychiatry in 2008 indicated that about 6 percent of the U.S. population suffered from NPD with a little less than one fifth of that group (1 percent of the entire population) suffer from ASPD as well.

Virtually all of the literature on these disorders indicate that the two in combination are truly toxic. The Diagnostic and Statistical Manual of Mental Disorders states that the two disorders are in some respects similar. People with either of the disorders “share a tendency to be tough-minded, glib, superficial, exploitative, and unempathic.” They differ, however, in that those with narcissistic personality disorder do not “necessarily include characteristics of impulsivity, aggression, and deceit.” On the other hand, those with ASPD “may not be as needy of the admiration and envy of others…”

Beyond merely wanting to focus primarily on themselves and be held in overly high regard by virtually everyone in their lives, malignant narcissists tend to have a darker side to their self-absorption. Malignant narcissists can be highly manipulative, and they don’t care who they hurt as long as they get their own way.

Fromm who was a survivor of the Holocaust also saw the disorder as extremely dangerous, arguing the disease was “the quintessence of evil”. He characterized the condition as “the most severe pathology and the root of the most vicious destructiveness and inhumanity.” He argued that malignant narcissism drove the destructive rampages of both Stalin and Hitler.

The Psychology Today article discussing the prospect that President Trump may suffer from malignant narcissism examines whether or not he displays traits associated of ASPD:

In the past year, he has become more and more aggressive in dismissing government employees who he considers disloyal to himself—from cabinet heads to career diplomats to the inspector generals of several federal departments. Some would say that these are reasonable responses to the Mueller investigation and efforts to impeach him. Others would say that these actions show an increased pattern of aggressiveness, recklessness, vengefulness, and an effort to surround himself with compliant officials he can dominate—characteristics of antisocial personalities…

It cites accounts by Pulitzer Prize winning reporters Phillip Rucker and Carole Leoning of Trump’s public humiliation of his own appointees as evidence of the impulsivity, aggression and willingness to hurt other people which is associated with ASPD:

In one incident with “his” generals, he yelled at them in front of many others: “You’re a bunch of dopes and babies.” Apparently, officers and staff were shocked and tried to look away. At another time, he berated his Attorney General, Jeff Sessions, who had been the first major politician to support his candidacy. “’It’s your f—ing fault,’ he said. “You’re weak. This is all your fault … You should f—ing resign.’ Sessions’ eyes well up. He was holding back tears with everything he had. By this point, McGahn, Pence, and Hunt were watching the president break the attorney general in front of their eyes.” The others in the room asked to be excused…

The article notes that Trump appears to have become more aggressive, more reckless, more fearful, more stressed, and more isolated with the passage of time and concludes:

Some people will say that his words and deeds simply demonstrate harmless hyperbole. Others will focus on the events of the day, viewing each event in isolation as a political issue to argue about, perhaps with name-calling and extreme emotions. But those who recognize personality patterns and use personality awareness to predict future behavior may see this update as a cause for grave concern, whether or not this meets the criteria of a mental disorder.

My goal here is not join the chorus of people arguing that the President suffers from a serious and potentially dangerous disorder. I am not trained to make such judgments. But I think it is important for anyone who cares about the wellbeing of the country to recognize that a great many people who have such training see a real potential for dangerous or even cataclysmic abuse of power. Further, it is important to consider what our Constitution permits us to do to protect ourselves in the event that these concerns prove to be well founded–even as the President’s tenure is now measured in weeks rather than months or years.

The 25th Amendment which is designed to deal with Presidential disability seems of little use in the event the disability is an emotional one in which the President does not acknowledge the impairment. The only real break which our Constitution provides on the actions of a rouge president is impeachment. It can no longer be argued that the President’s removal through impeachment would subvert the opportunity for voters to decide who should lead the country. But most importantly, impeachment does not necessarily need to be used or even discussed to be effective.

It takes 67 votes in the Senate to remove the President. That means that only 20 of the 53 Republicans now in the Senate could send the White House a very clear message that the awesome powers of that office are not to be used in ways that violate the norms of our republic, threaten the health and safety of our citizens or undermine the foundation of our democracy. The President should spend his final weeks in office conducting the people’s business in a manner consistent with the behavior of his predecessors or he should be on notice that Vice President Pence will perform that task for him.

Thus far, we have not seen the kind of courage or patriotism from Republican Senators that would allow us to believe they could play such a role. But these are extraordinary times. What level of abuse and destruction of public trust will they find unacceptable? Surely, there must  be a limit!

Congress Must Fill the Void