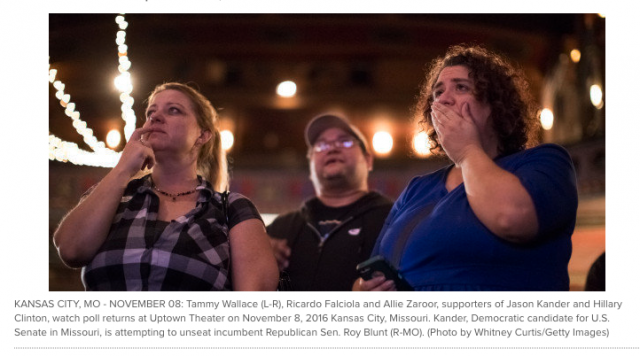 The Democratic Party is just about as badly bruised right now as I have ever seen it. Potentially, however, it faces the brightest future it has had in decades.

The Democratic Party is just about as badly bruised right now as I have ever seen it. Potentially, however, it faces the brightest future it has had in decades. Donald Trump’s victory may not have been good for the country but there is a good chance it will be terrific for the Democratic Party.

All presidents face a period of buyer’s remorse and that remorse normally surfaces at the time of the midterm election. Barack Obama saw his party lose 63 House seats, 6 Senate seats, 6 governorships and 680 state legislative seats. In the last 50 years, first-term presidents have on average lost more than 27 House seats in the midterm. But Trump’s challenges seem well beyond those of most incoming first-termers.

For one thing, his promises seem not only far more grandiose than those of his predecessors but also full of political landmines and hidden costs that are almost certain to be unpopular with not only the general public but many of his own supporters. During the campaign he neglected to mention that workers in export industries will suffer from his proposed higher tariffs or that saving only the popular parts of Obamacare such as preexisting conditions will drive insurance premiums for the rest of Americans through the ceiling. He also forgot to mention that adding $50 billion a year to the defense budget while initiating a $1 trillion dollar infrastructure program and cutting taxes will add mountains of new debt to the national balance sheet push home mortgage rates to the highest levels in more than a decade and bring the real estate market to a screeching halt.

Time and again, Trump will be forced to explain why the real world is more complex and difficult than the one he described in his campaign. He will repeatedly be pegged as another politician who talks a big game but doesn’t deliver.

He has another big problem. Trump has far fewer buyers to lose to remorse than any of his predecessors. Current estimates indicate that he will have lost the popular vote by a margin of more than 2 million, once all outstanding ballots are counted. That is nearly four times the size of George W. Bush’s popular vote loss in 2000. His margin in the Electoral College was also razor thin. Flip a combined total of only 54,000 votes in Pennsylvania, Michigan and Wisconsin or 0.4 percent of the ballots cast in those states and Hillary Clinton wins the Electoral College by 44 votes. Switch another 150,000 votes in Florida and North Carolina and that margin becomes 122 electoral votes. The fact is that election night was within a decimal point of being the lopsided electoral vote Clinton victory that the polls were predicting.

But Trump’s worst problem is the remarkable number of people who voted for him but who never liked him in the first place. Even though he starts out deeper in the hole in terms of electoral support than any modern incoming president, a significant portion of have a harshly negative perception of him as a person and a leader. Exit polls indicated 16 million of the 60 million Americans who voted for him, 27 percent, thought he had the wrong temperament to be president. A total of 28 percent thought that he was not “honest and trustworthy”. Forty three percent of his supporter said that they were troubled either a lot or somewhat by his treatment of women and nearly one fifth or 19 percent said they had a generally unfavorable opinion of him.

Throughout the fall, Trump maintained a dedicated base of around 38 percent of the electorate. Clinton had a base of about 42 percent. About 20 percent of voters couldn’t decide which of them they liked least. By mid-October they were breaking significantly toward voting for Clinton. By Election Day they had shifted decidedly toward Trump. Clinton won only 3 in 10 voters among the 20 percent who viewed both candidates negatively.

Trump’s victory on Election Day was based almost entirely on not being Hillary Clinton. That attribute will mean almost nothing when he takes office on January 20th.

So how do Democrats capitalize on these opportunities? They could wait on the sidelines and see what happens. They could argue amongst themselves about which policies they would have adopted had they won the election. Or, alternatively, they could get to work.

The first place to go to work is the Democratic National Committee. A new chairperson is to be selected and it is an opportunity to demonstrate to voters that the Party is listening. That it has learned the lessons of the 2016 elections and that it is moving in a direction that will be far more inclusive and welcoming. Specifically, Democrats need to show that they are ready to compete in parts of the country that they lost in 2016 — places they need not only if they hope to win the Presidency in 2020 but are essential to retaking at least one of the two houses of Congress in 2018. Perhaps most crucially they need to use this opportunity to win enough Democratic seats in state legislatures to rebuild the Party’s bench and give it a reasonable shot in the 2020 redistricting.

In short, if Democrats ever hope to actually deliver on any of those wonderful ideas they can’t stop talking about, they need to shift their focus from their base to winning the hearts and minds of voters who ought to support them but in the last election didn’t. They need to do better among White people who made up 70 percent of the voters on November 8th. Perhaps, most importantly, they need to make a serious make effort to make up ground between the Appalachians and the Sierra Nevada Mountains where they won only 50 of the 205 electoral votes cast by the 29 states in that region.

In my view they have at least one extraordinary opportunity to set that course, a person who has proven he knows how to win the support of voters who are otherwise skeptical of Democrats.

Jason Kander lost a tight Senate race in 2016, but he ran a full 8 points ahead of the Democratic nominee for president. More than 200,000 people in the State voted for Kander who did not vote for Clinton despite the fact that his campaign featured a hard-hitting ad in favor of gun regulation in a state that is a bastion of the National Rifle Association. He is 35 years old. He is the Secretary of State of Missouri and last Tuesday he came within a few thousand votes of becoming a United States senator. Doubtless he would have been elected senator if the national ticket had run only modestly stronger in the State.

Kander is not in any way part of the Washington establishment nor any of the competing factions in the national party. His leadership could make an important contribution to transforming the party from the aging, bicoastal establishment image from which it now suffers. It would make it clear that a new team is in charge and that new people are welcome.

I don’t know Kander personally but those that I do know who have met him are in broad agreement that he is not only the most impressive candidate they met not only during in this election cycle but the most impressive candidate they have seen in either party for some years. As far as I know, he is out of a job in January and we need a full-time leader.

Whether Kander would accept an effort to draft him for DNC chair is uncertain but he is a good example of the direction the party must go if it wishes to deliver on all or part of its important agenda and block the likes of Donald Trump from wielding the levers of power in Washington. If the Party wants to win it can’t return time and time again to the same old set of names and the same old formulas for party leadership and direction. Let’s give a new guy a chance!